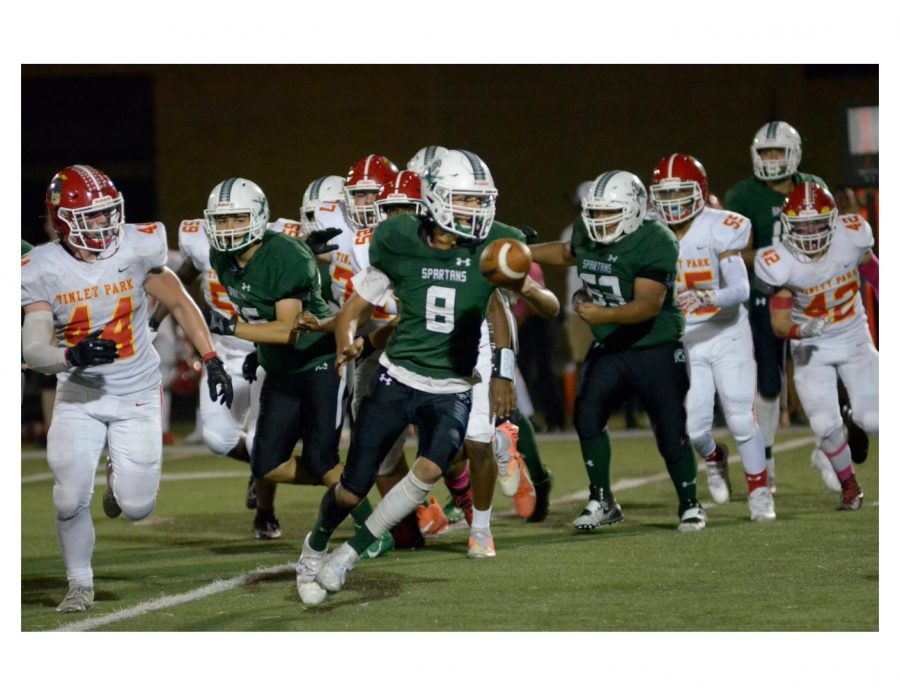 Despite a rough start at the beginning of the year with a 64-8 season-opening loss to Rich Township and with many first-year football players, the football team collected time and energy to show what they were made of and what they could accomplish together all season long.

Friday night in Oak Lawn, the Spartans still had a chance to make the Illinois High School Association Playoffs for the first time since 2009 when they hosted Evergreen Park. However, after trailing 14-7 at halftime, Oak Lawn never completed that final push to qualify for postseason football. The Spartans fell 35-13and ended the season with a record of 4-5 overall and 3-4 in the South Suburban Conference.

Despite the heart-breaking loss, the Spartans thrilled the fans throughout the course of the season. Here is the season in review.

The Spartans rebounded after the season-opening loss with a 40-21 win over Stagg. Then, they opened up conference play and beat Eisenhower, 8-6 on the road. Oak Lawn then lost back-to-back games to Reavis, 37-14 and Richards, 33-13.

Then, the Spartans beat Tinley Park, 27-26 in a game that came down to the last play of the game, where Gabe Duer broke up a two-point conversion attempt to preserve the hard-fought victory. However, Oak Lawn then lost to Shepard, 46-15 in Week 7.

In Week 8, the game against Argo was a 54-12 win where the Spartans destroyed the Argonauts for the whole game.

“We can see early on that there are player inconsistencies every now and then but that is expected because practice will eventually make perfect even if we underperform now and then,” head coach Ryan Pattison said. “We are a week-to-week team, sometimes we are at a 5 and sometimes we are at a 1,  sometimes we have great practices and we’re ready to go, and some weeks we’re not, but I think that’s just the part of changing the culture and student-athletes getting used to how we are running things here. I think it depends on day-to-day and week-to-week how we are doing.”

The coach painted a picture of team bonding and showed that football is not just sports, but a mental training exercise.

“Yes, we select new captains every single game; some of them have been captains in previous games, we go week-to-week with our captains,” Pattison said. “We feel we have so many leaders it’s not fair to just choose four, and it allows us to let people step up to be leaders.  We have a lot of leaders who step up in different ways and different times. This shows us the dynamic of our football team, showing them as a complex system that works together even if inconsistent sometimes where you can learn valuable life lessons and not just play sports.”

The coach also showed the school and fans that the team has had many hardships with the football culture and the way it is portrayed in our society. They had had to build up from scratch, but they overcame their hardships.

“The kids have very high expectations of themselves, and the coaching staff has very high expectations that you see our highs competing with better teams in the conference,” he said.  “But it’s important to note that just a couple of months ago we were learning our first play and learning how we practice and our expectations. You know how far they’ve come and the flashes they’ve shown. It’s pretty impressive, and just a couple months ago, COVID and all, they started from scratch, even if it didn’t seem like that at the game against Shepard.”

The coach seemed to be calm and said the players’ main goal going into Friday’s game with Evergreen Park was to make the playoffs. However, he is also looking toward the future.

“It’s great to see the other students come out and support in the stands and genuinely want football to do well,” Pattison said. “I’m hoping that some people in the stands want to watch and even play themselves. The main thing is just to grow the program in terms of the program, if you don’t wanna be a part of it, at least support our Spartan family.”

The players themselves talked about the atmosphere the Spartans created on the football field this year. Evan Zambrano and Hani Odeh had thoughts on the season.

“Yes, I do feel connected as a team, and yes your relationship with your team does affect your gameplay because you have to realize you have your brothers back and they have yours and that’s really it,” Zambrano said. “That’s really football.”

Odeh agreed. “Compared to last year, we were definitely more connected as a team,” Odeh said. “The new coaching staff brought in new energy, so we have more players and we are recruiting more. We have a good bond, radiating good energy like out at practice too. We always have each other’s back no matter what. We already know we may see things that other people don’t see together. We see each other as one entity.”

Throughout the year, the Spartans certainly faced their share of adversity, but the team responded well.

“Our biggest hardships were understanding what kind of team we are, and I think we really had a lot of first-year players, so getting everyone on the same page was definitely a struggle at first,” said Zambrano.

Odeh again echoed those thoughts. “One of the biggest hardships was coming back from that loss to Rich Township in Week 1,” he said. “Our team really fell apart, but everyone started pulling it back together. We all started working hard at practice and putting in 100%. Another hardship was the weather outside. We have been just putting it back together ever since the Reavis loss. in Week 4. We have experienced a couple hardships, a couple people arguing on the sides whatever, but just sticking together was the biggest thing.”

Despite the disappointment at the end of the year, the football team believes it is building a new culture at Oak Lawn.

“Just start supporting us, come out to the stands everyone just be loud,” Odeh said. “We can’t have fans in the stands just quiet, just there to watch us lose, the fans have to know we have a chance to win too. This isn’t the same Oak Lawn team as the last two years. We wanted to win. Energy around the school impacts us. If the school is talking positively about us saying that we got it, it will come out to a good outcome. And finally, just try football. Come try out for football.”

The team may have not started out the best, but they are on their way to success, even with all their hardships. They will overcome in years to come just like the Spartans they are.