While Trump works with Netanyahu on the new plan, many cry foul over the distinct lack of Palestinian voices in the conversation. 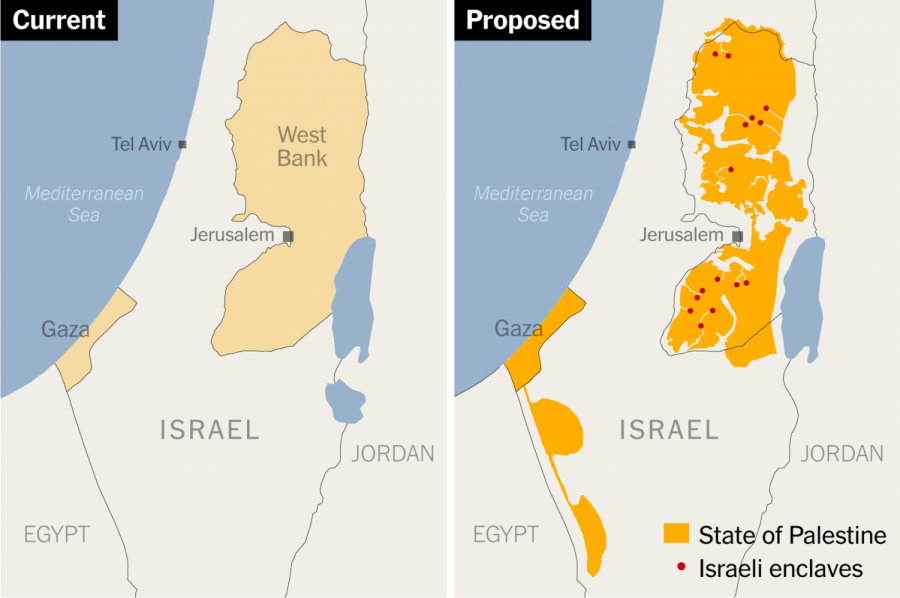 Tues. January  28– President Trump has unveiled his new plan for peace in the Middle East, produced in cooperation with the Prime Minister of Israel, Benjamin Netanyahu. The plan, as laid out, is intended to reduce conflicts between Israeli and Palestinian authorities.

The basic layout of the plan is as follows: Israel will annex any lands in the West Bank in which they have settlements. Including the majority of East Jerusalem and the entirety of the Jordan valley. The settlements in question are illegal Israeli settlements on Palestinian territory, and violate international law. A unified Jerusalem will be recognized as the Israeli capital. There will be a four year freeze in further settlements, pending attempted negotiations with Palestinian authorities. 50 billion dollars in international aid will be given to build a new Palestinian entity and establish an embassy there. Furthermore, the new Palestinian State would not be allowed a standing military, and would be required to meet benchmarks overseen by the Israeli government. This plan does not address the fate of any Palestinian refugees and would have Palestinian territory in the West Bank reduce by approximately thirty percent.

Hours before the release of this plan, Prime Minister Netanyahu was indicted on charges of corruption by the Israeli attorney general, Avichai Mandelblit. Netanyahu had previously tried to claim parliamentary immunity from such charges, but his request was quickly denied. This will be the first time any sitting prime minister has faced criminal charges in Israeli history.

Reactions to this plan have been mixed. Proponents of Israeli interests have mostly praised the plan, though some have been left wanting more, while defenders of the Palestinian cause have nearly universally criticized the plans as an attack on Palestinian sovereignty. With President Abbas of the Palestinian Authority declaring intent to cut ties after this, “We’ve informed the Israeli side … that there will be no relations at all with them and the United States including security ties,” Abbas declared, at a meeting with the Arab League in Cairo.

Response from displaced Palestinians has also been largely negative, with many Palestinian-Americans feeling that Palestine has been unfairly left out of the conversation. When asked her thoughts on the matter, local Palestinian-American college student Danyah Thnaibat responded, “I think that this conflict is continuing to follow this narrative, where big decisions aren’t being made holistically; it’s an outside intervention for an issue that’s excluding the people it directly affects.”

As usual, it seems peace in such a controversial area is hard to come by, and solving the underlying problems in this conflict is much easier said than done. Whether or not this plan proves effective if for the future to decide. At this time, however, the future is still uncertain for a region home to over 12 million people.