A Desecrated Institution, a Cultural Travesty, and A Government’s Negligence: The Tragedy of Brazil’s National Museum 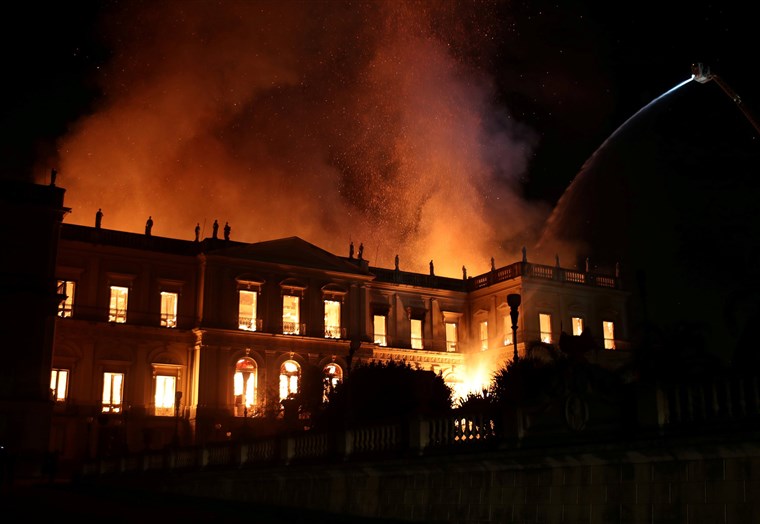 The Brazilian National Museum as it was ravaged by a fire

September 2, Rio de Janeiro, Brazil— Tragedy has struck in the heart of Brazil. On September 2nd, at approximately 7:30 P.M. BRT (9:30 CST), a devastating fire broke out at the National Museum of Brazil housed at Paço de São Cristóvão, a former Brazilian imperial palace. Firefighters rushed to the scene, however, the two nearest fire hydrants were no longer functional, and as a result, they had to resort to using lake water to quench the flames. This time which was taken enabled the fire to spread significantly, unfortuantely. Simultaneously, workers rushed to save what they could from the museum. Despite the efforts of the firefighters quenching the flames, as well as workers attempting to save the priceless collection of some twenty million artifacts, the blazes continued on through to the early hours of Monday morning. This all resulted in a devastating loss.

In the wake of the destruction, hundreds of protesters from every walk of life were grieving the total cultural destruction, and were furious at the Brazilian government for not preventing the disaster. They gathered outside the museum, attempting to gain entry in order to see the devastation for themselves. To them, this was not just about the museum. To them, this was about the state of Brazil as a whole. As Marina Silva, a Brazilian presidential candidate, put it, the fire is “a lobotomy in Brazilian memory”. In the end, the crowd was held back by the police, who used pepper spray, tear gas, and even physical weapons such as batons to hold back the furious crowd. Eventually, they were allowed through the gates, but had blocked entry from the building, letting the professionals could thoroughly analyze the damage. The damage was catastrophic, only an estimated ten percent of the 20,000,000 artifacts survived, with the other 18,000,000 artifacts swept into oblivion, preserved only in photos and the memories of those touched by the museum.

The museum housed amazing collections, including, but not limited to; one of the oldest and largest Egyptological collections in Latin America, a grand collection of Greco-Roman art, a Palaeontological collection containing hundreds of specimens, including some sole representatives of long dead creatures, and, perhaps most significantly, its anthropological collection. The anthropological collection the museum housed hundreds of irreplaceable cultural artifacts from indigenous tribes and other cultural minorities, countless recordings of endangered or extinct languages, many of which only existed there, at the museum, and perhaps most significantly, the oldest fossil human remains found in South America, and perhaps the oldest in the entire Western Hemisphere, those of Luzia, a girl who is believed to represent one of the first waves of migrants to South America. All of these collections are gone, or at least severely depleted. There is however, one small ray of hope for Luzia, a skull was found buried in debris from other exhibits, and could very well be those of the 10,000 year old, however, the skull is awaiting further analysis to confirm this hypothesis.

Unfortunately, this disaster was anticipated. The museum building had been showing clear signs of disrepair for years, and as the staff faced a steadily shrinking budget (from $130,000 to $84,000 between 2013 and 2017), there was only so much they could do. While the government spent millions on state of the art stadiums for FIFA and the summer olympics, the National Museum and other academic institutions were begging for enough funds to get by. Underfunded and understaffed, there was only so much that could be done. The government had little concern for Brazil’s cultural history and its people, or as Rosana Hollanda, a high school teacher among the protestors, tearfully put it, “This fire is what Brazilian politicians are doing to the people. They’re burning our history, and they’re burning our dreams.” In an ironic twist, the museum had only just been approved for some much needed renovations, including a fire-prevention system, after years of campaigning. The employees had fire prevention training, but unfortunately, as the museum had been closed for the night, there was no one there to stop the flames, the source of which is still uncertain. After the flames left their mark, however, a six million dollar fire prevention plan for national monuments around Brazil was announced, which is, unfortunately, too little, too late for the museum and its collections.

There are, however hopes to rebuild. While only ten percent of the artifacts survived, that is still 2,000,000 artifacts, which can be contributed to a rebuilt museum. Furthermore, banks across the nation, both public and private, have offered their aid in the efforts to rebuild the museum. Students are also doing their part to preserve the legacy of the museum, former patrons of the institution are being begged to email their photos of the museums collections, in order to restore whatever information is possible to glean from the photographs. Much of people’s efforts to contribute to this effort can be viewed online, on social media posts where people share photographs from their visits and stories of how the museum has benefited them personally. Unfortunately, what was lost is largely irreplaceable, and what can be gleaned from photos pales in comparison to what was lost. Scholars are mourning the loss of information, but the people mourn the cultural memory.

In the end, this disaster has been a loss for all, both within Brazil and internationally, and should serve as a wake up call to institutions and the governments responsible for maintaining them around the world. Think of your museums. Your knowledge. Your culture. These things are not indestructible, and if something isn’t done, you can, and almost certainly will, lose them. The wealth of knowledge and cultural connections brought by such institutions has to be treasured and protected, or else it will no longer be there for those who will come after us.