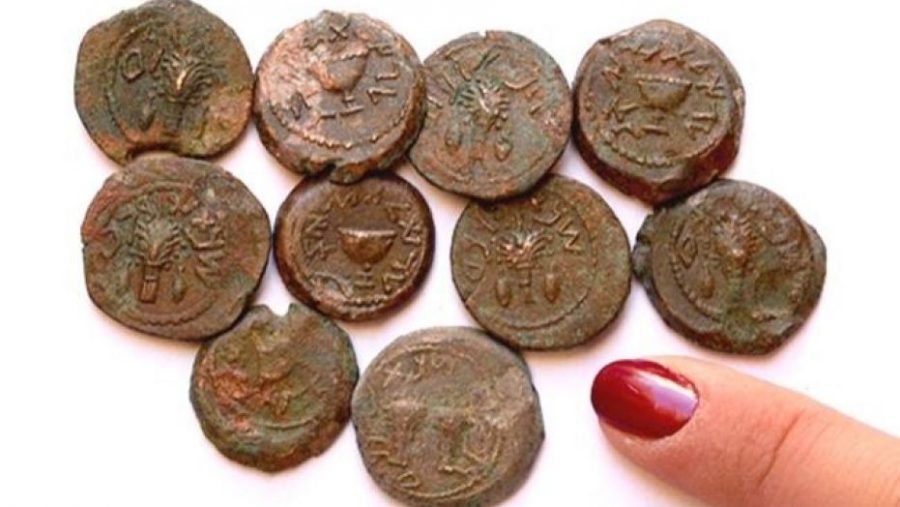 The Coins from the Jerusalem excavations

Jerusalem, Israel— Shortly before the Jewish holiday of Passover at the end of March, a fascinating discovery was made during excavation of the Old City in Jerusalem, just below the Temple Mount’s southern wall. This excavation uncovered a rare cache of bronze coins dating back to the Jewish revolt against the invading Romans from the years 66 to 70 AD. (Though there was a small amount of resistance continuing until 73 AD).
The coins, mostly dating to the fourth year of the revolt against the romans, reflect the failing hope of the city’s Jewish citizens as the rebellion failed. The coins dating from the early years of the revolt have an inscription, stating “For the Freedom of Zion”, indicating the hopes of the city’s Jewish residents for the future and their success in this revolt.
The first Roman-Jewish war, sometimes known as the Great Revolt (known as “המרד הגדול” or “ha-Mered Ha-Gadol” in Hebrew), was the result of several sporadic occurrences in which small groups of Jews rebelled against the Romans, who responded with tenfold force. Eventually, the Jewish citizens of Judea banded together to expel the Romans from the city, setting up a revolutionary government through the entire country. This victory was not to last as the infamous Emperor Nero dispatched many men to crush the revolt, and the Jewish army, led by Josephus (more famed for being a historian than a general) fled. On August 29th, year 70 AD, (9th of Av in the Jewish calendar) the Romans were finally victorious and the temple was destroyed, causing the revolutionary government to collapse.
Coins dating from this fourth year, reflecting the failing hope of the city’s Jews, bear a different inscription, “For the Redemption of Zion” indicating an understanding that they could not hold out against what was at the time the most powerful empire in the old world. These coins, in their lonely cave where fearful Jewish residents fled the might of Rome, reflect a somber moment in Jewish history, a history that, unfortunately would remain somber in the millennia to come. In this modern climate with anti-semitism once again rising, some may find it pertinent to remember the tragic past of the Jewish people, and take it to heart, ensuring that such destruction does not happen again.